Environment is responsible for creating conditions suitable for the existence of a healthy biosphere on this planet. Our life is dependable upon the environment; its absence causes many adverse and harmful effects. Without sustainable environment and natural resources, one cannot survive. Human existence on the earth will be endangered if we do not change out hostile attitude towards nature. Therefore, it is better to mend our ways and live in harmony with nature. People today, especially the young people, are concerned about the environment. So, it is important to conserve our nature   by academic co- curricular activities.

The main objectives of establishing the Biodiversity Clubs include

Benefit sharing of biodiversity resources in association with BMCs 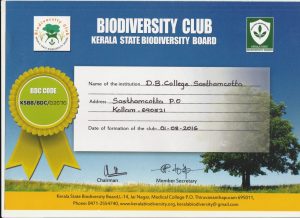 Student participation in floristic study at the college  level is essential for the longevity and expansion of  Biodiversity, Botany, Plant ecology, and their many associated fields, but knowledge and college course options have been decreasing. In many cases students are unaware of the botanical biodiversity that is right in front of their eyes. We started a project called Flora of D.B College  Campus , which provides students with hands-on outdoor fieldwork as an engaging and effective way to experience Floral diversity  first hand. In 2016-17, 12 students participated in this project. This project strongly increased the students’ knowledge of local plants and floral diversity.

A book titled “Campus Flora” written by Dhanya S,R , Asst. Professor in Botany was published on 26 th August 2016 at Digital Seminar hall, K.S.M.D.B College Sasthamcotta. The meeting was presided over by Principal Dr. D. Latheesh, chief guest of the day was Dr.T.S Swapna, Principal Scientist,  Kerala State Biodiversity Board, Thiruvananthapuam released the book by handing over the same to our principal. our club members like Ms Jincy, Ms Johina Raj, Ms Renjini and Ms Anjana. Dr. Susmi Sabu, Asst. Professor in Sanskrit and extended great support to this venture.